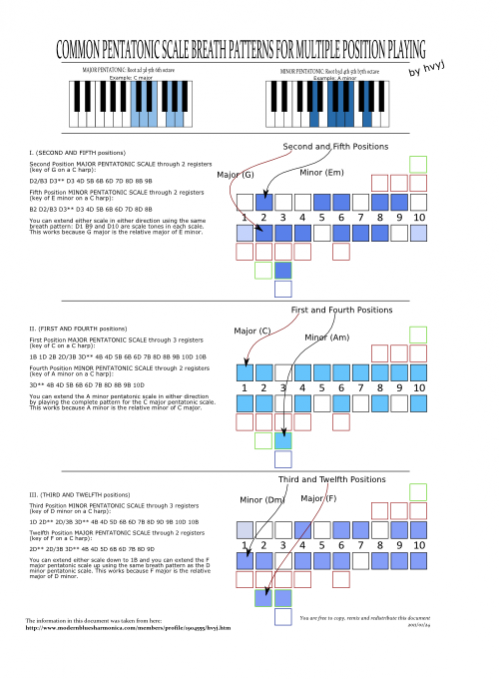 Beginner asks "what harmonica should I buy?"

I bought a $5 harp and it plays poorly. Can you fix it up and make it play better? What brand of harp do you recommend for a beginner?

I can't fix the cheap harp. Although it may be branded as a Hohner or Suzuki instrument, these harps are awful to play and do not have the potential to be improved - a terrible choice for a beginner. What harp to buy? As a general rule, I suggest you buy a harp that was made in Germany or Japan. I also suggest you buy a harp that can be taken apart with just a screwdriver if you need to set it up to your liking.

Harps that meet those criteria and are affordable include the Hohner Special 20 or the Suzuki Harmaster/Delta Frost. They are easy to find (in stores or online) and the quality is usually consistent. A good place to start.

I would encourage you to eventually buy other types (Seydel 1847, Lee Oskar, other Hohner Handmade harps like Marine Band, Blues Harp, etc...) Anyone who starts playing harp rapidly gets addicted and soon finds that they have bought a collection of instruments in various keys and from various manufacturers. Take your time before deciding that you want to stick with one particular make or model. It's good to change things up; for example, Seydel harps have wider spaced holes than other brands and that may take a week to get used to. That's a good exercise for your muscle memory as well as your brain. And overall, that workout will make you a better player.

The advantages and disadvantages of the various kinds of good-quality out-of-the-box harps fall into two categories:

1- deficiencies such as the harp not being airtight, not being set up so that it is easy to play, or being out of tune.

2- matters of preference such as the size of the harp, the material it is made of, the shape of it in your mouth, shape of the cover plate.

All out-of-the-box harmonicas will have deficiencies. Some less that others but you can't expect a store-bought harp to be perfect. As a beginner, you need to figure out if you are having trouble playing a certain note because of your technique or because the harp is leaky or not properly set up. Even the most expensive out-of-the-box harmonicas suffer from this problem. That's because it's not feasible for the harmonica companies to mass produce harmonicas and give each instrument enough attention to ensure that each one is precisely set up. That being said, there is no problem that can't be fixed, and part of learning the harmonica is to either learn how to fix them/set them up yourself or get a guy like me to do it for you.

It's a chicken-or-the-egg situation, since you need to know what a proper harp sounds/play like in order to tell if a harp is not in proper order. I recommend you get a harmonica teacher and take a few lessons to start - if you have a questionable harmonica, your teacher will be able to help you troubleshoot.

Here's one last thought. I went to see a Curtis Salgado show last summer and I got to speak with him afterwards. I asked him what harmonicas he plays and he said "I'll play anything anyone gives me as long as it's in tune." Words to live by.

I have had many people ask me to tune their harps "like a Crossover", something I am happy to do. Here are my thoughts on this tuning. First of all, regarding Hohner Crossover tuning, Steve Baker posted the following on Harp-L:

It's highly recommended to check that all perfect intervals (octaves, fifths and fourths) sound without interference beats. This is what
piano tuners do too. You'll find it's damnably difficult to obtain constant readings from your tuner and I can only recommend playing very softly indeed and holding the note for a long time so you get a fairly clear note value. I use a Korg MT-1200 tuner with a built-in spread which tunes the upper octaves slightly sharper (as do piano tuners) and use the smallest spread the machine offers. It's hard to work to this degree of accuracy with a tuner which only shows Hz values.
Hope this will be of assistance,
Steve Baker
www.stevebaker.de
www.bluesculture.com

His description of how he tuned the master plates is very telling. It's not a bunch of theoretical numbers but a recipe to follow to replicate the sound of his own harps. The blow plate is A=443 with the thirds being somewhat less flat that the usual Hohner compromise tuning. It's much like the Manji compromise tuning - closer to ET but still a compromised tuning.

The draw plate is real-world tuned. I think because draw notes are usually more expressive than blow notes, many people hit them harder. The harder you hit a note, the flatter it will be. By tuning the root note to +6 (draw 2), the draw plate is really tuned to A=444 or higher. But as you play it "in the real world" such as on stage or while jamming, the draw 2 should sound the same as blow 3. The thirds on the draw side are tuned to zero, but relative to the root note (2 draw) they are -6, almost like the thirds on the blow plate (-5). The rest is again compromise, but close to ET. The sevenths are a little flat, as flat as the sevenths on a Seydel - again, relative to the draw 2.

I know Jason Ricci used to like his harps tuned to 443 on the draw side and 442 on the blow side.

I think the Crossover is the only out-of-the-box harp on the market today to compensate for the fact that the 2 draw and the 3 blow need to be tuned to different values to sound the same - for some of people, anyway. Consequently, the rest of the notes on the draw plate need to be a little sharp.

Some people hate the tuning. I reckon than some people don't hit the draw notes very hard (or hit the blow notes just as hard) and in that case, the draw notes are sharp or just plain out of tune.

This is the way I interpret this tuning. If anyone else has a different take, I'd be interested in it.