Here are some pretty cool looking (and useful!) wallpapers for your computer screen. Not only do they look awesome, use these charts and tables to help you as you work! 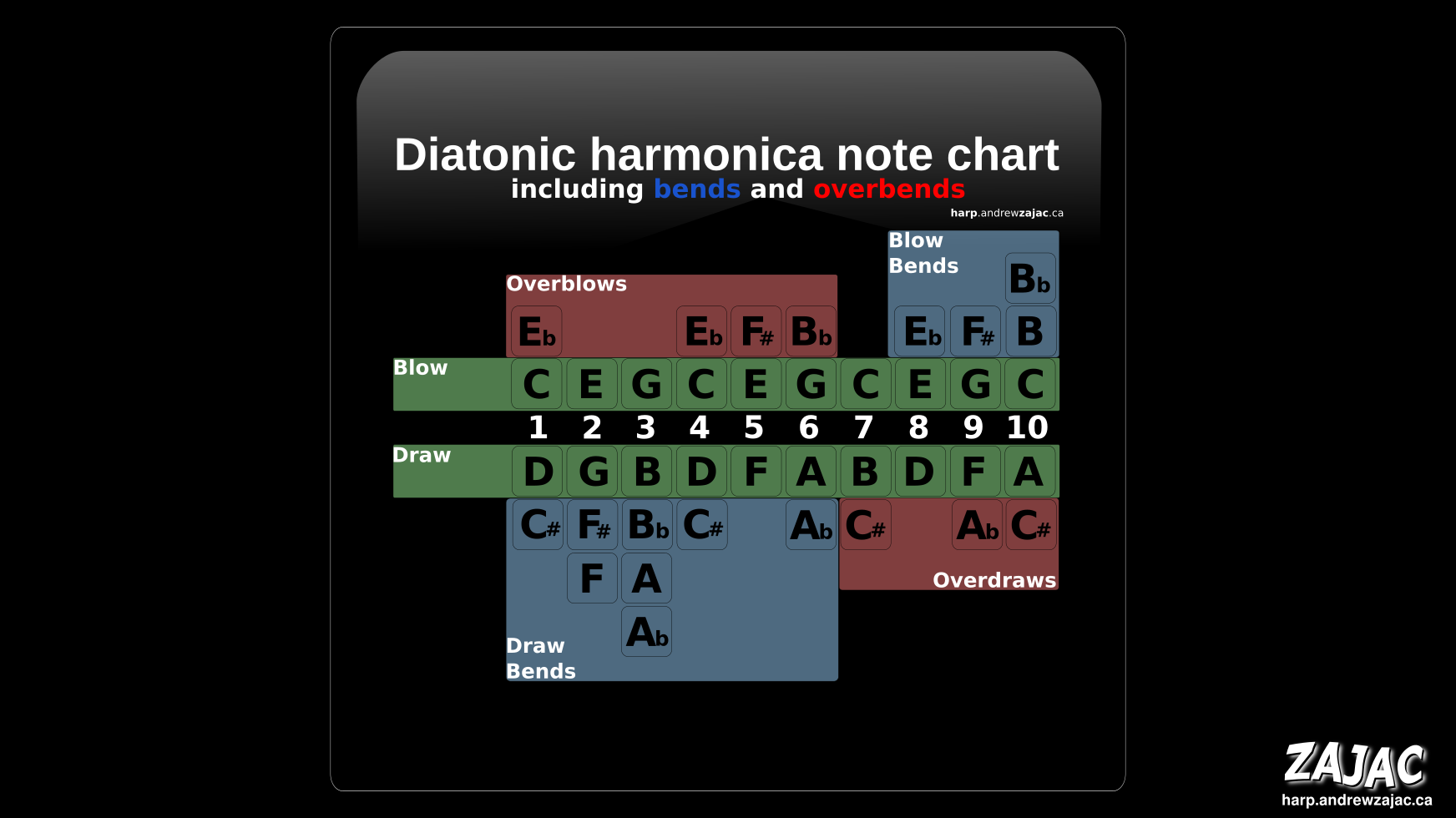 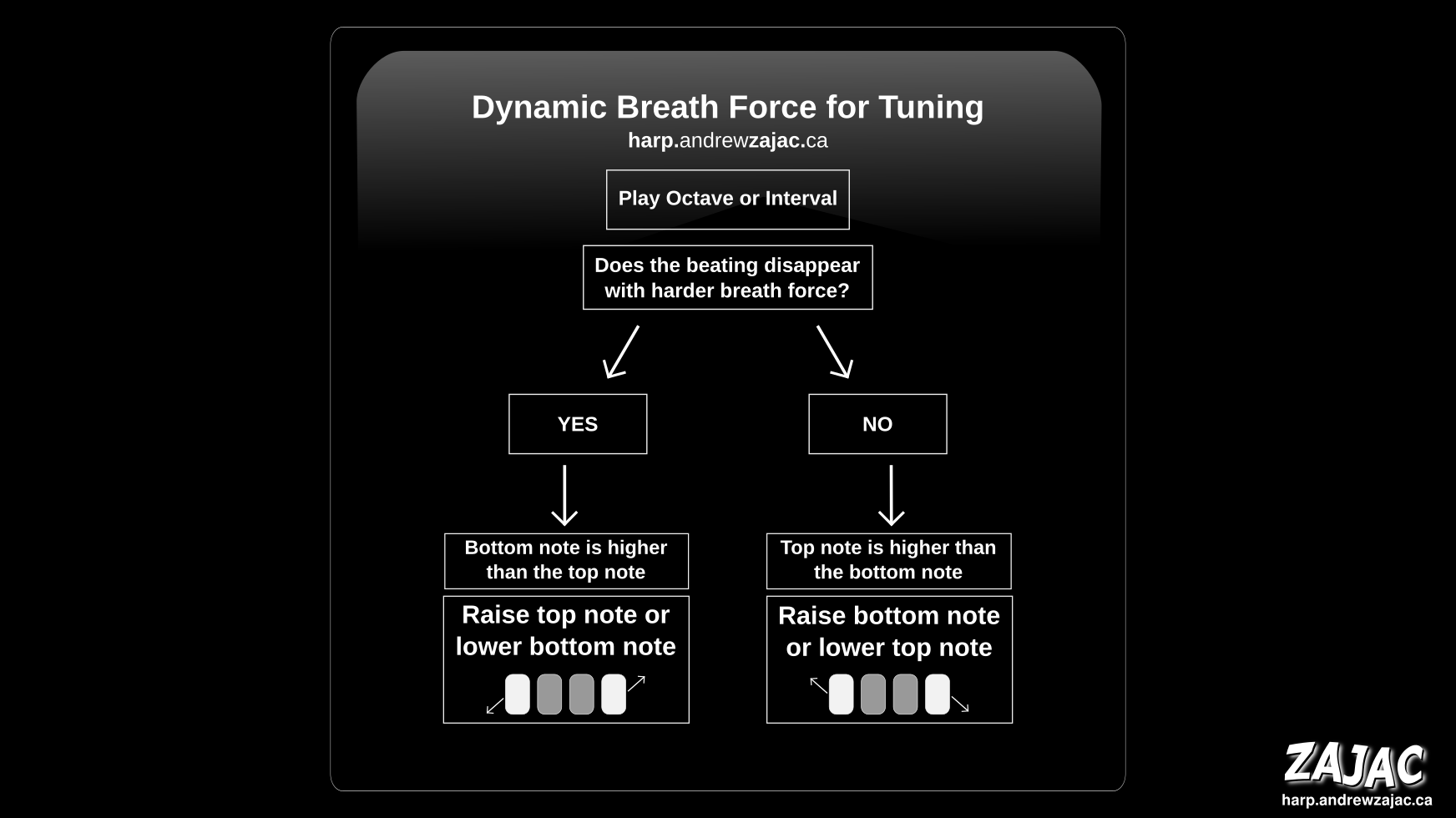 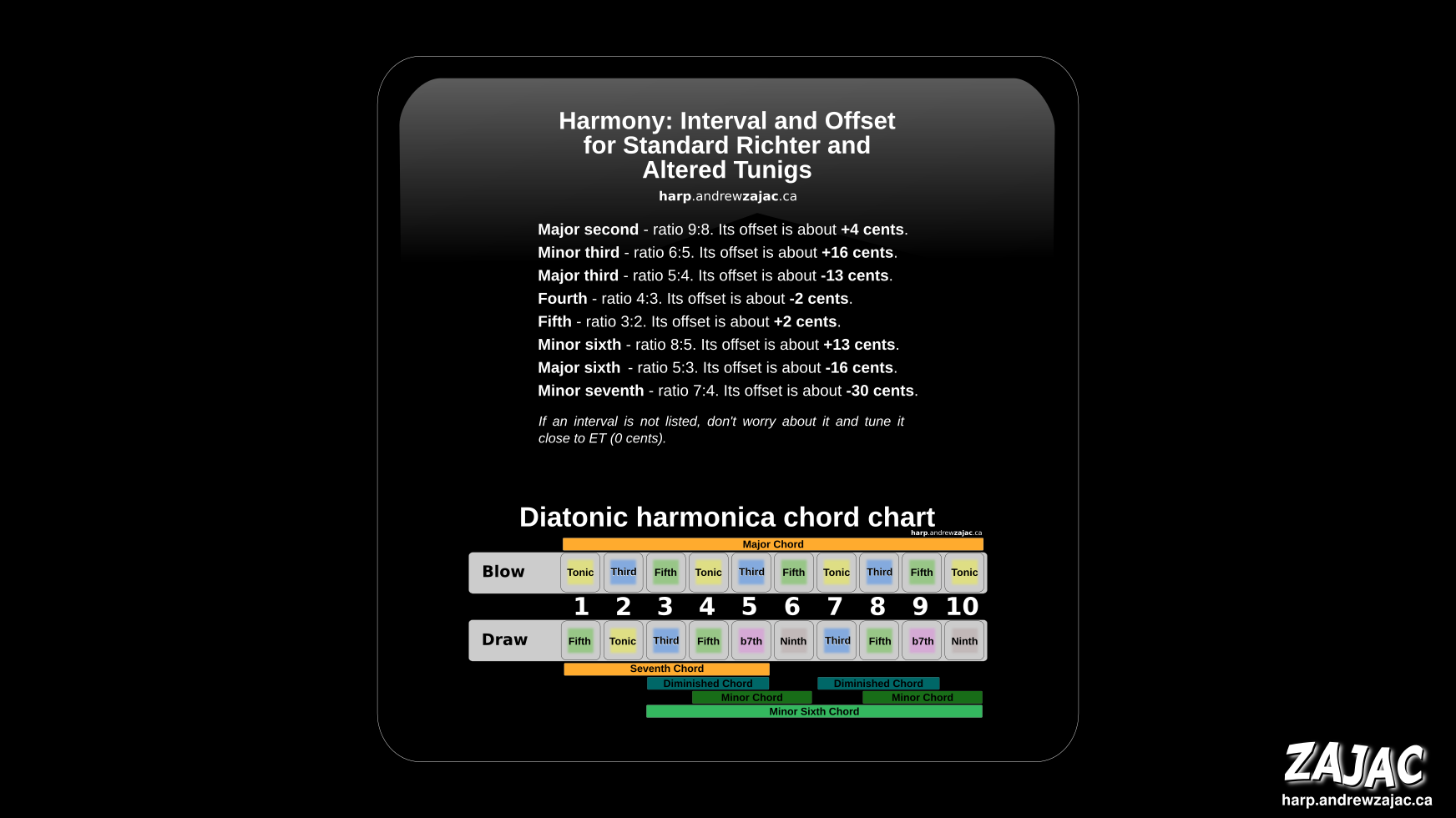 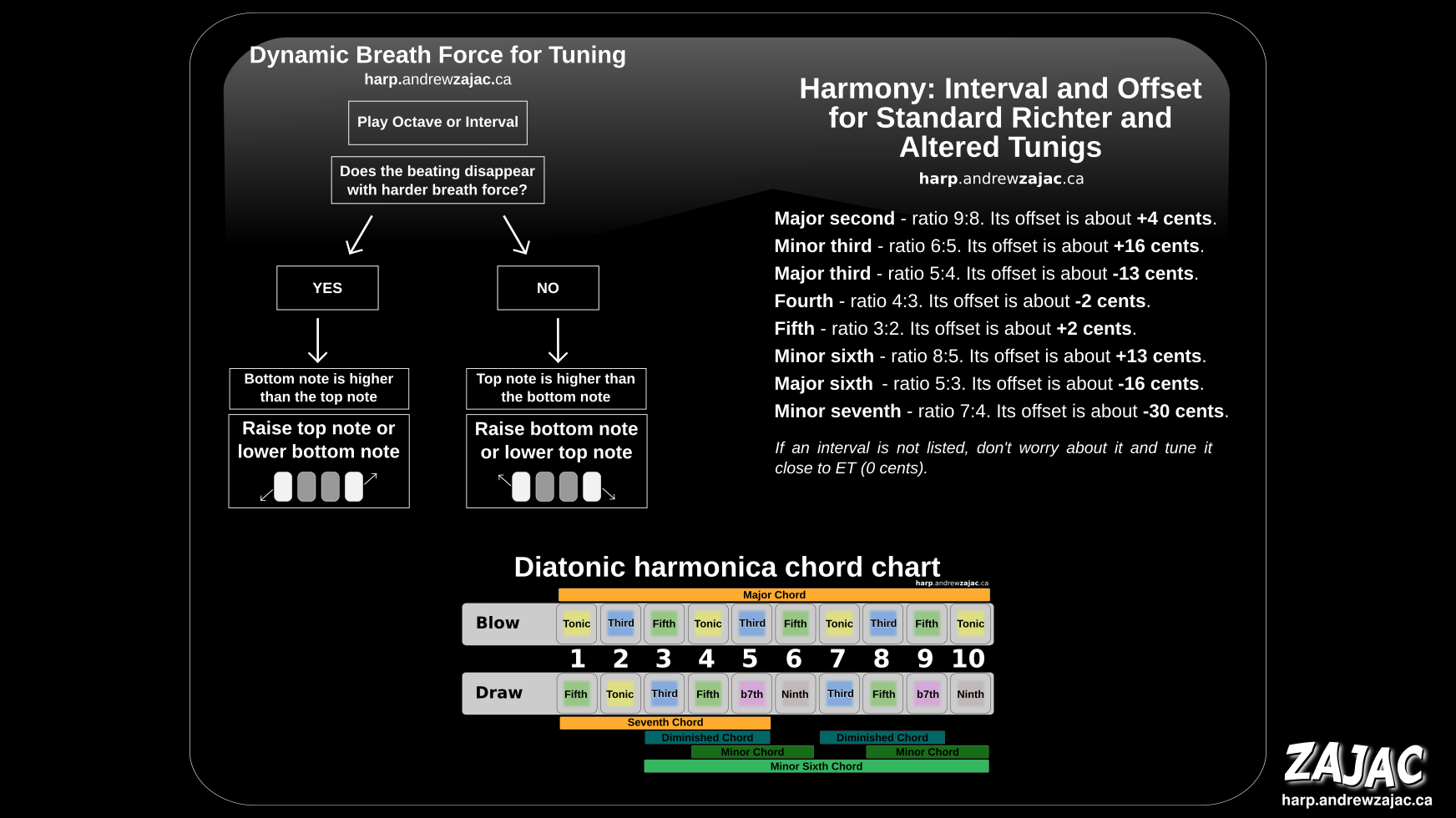 HD All the charts: 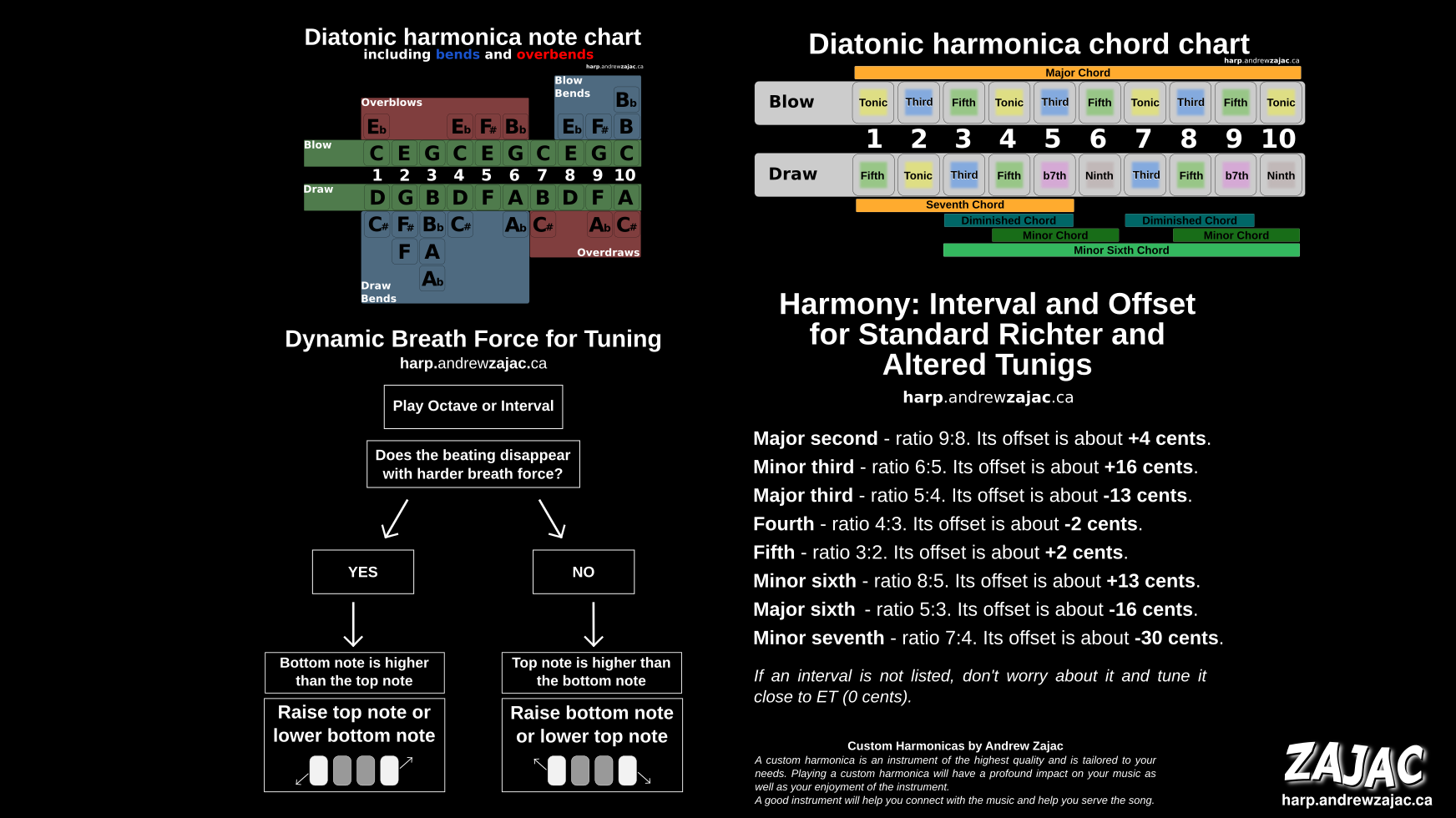 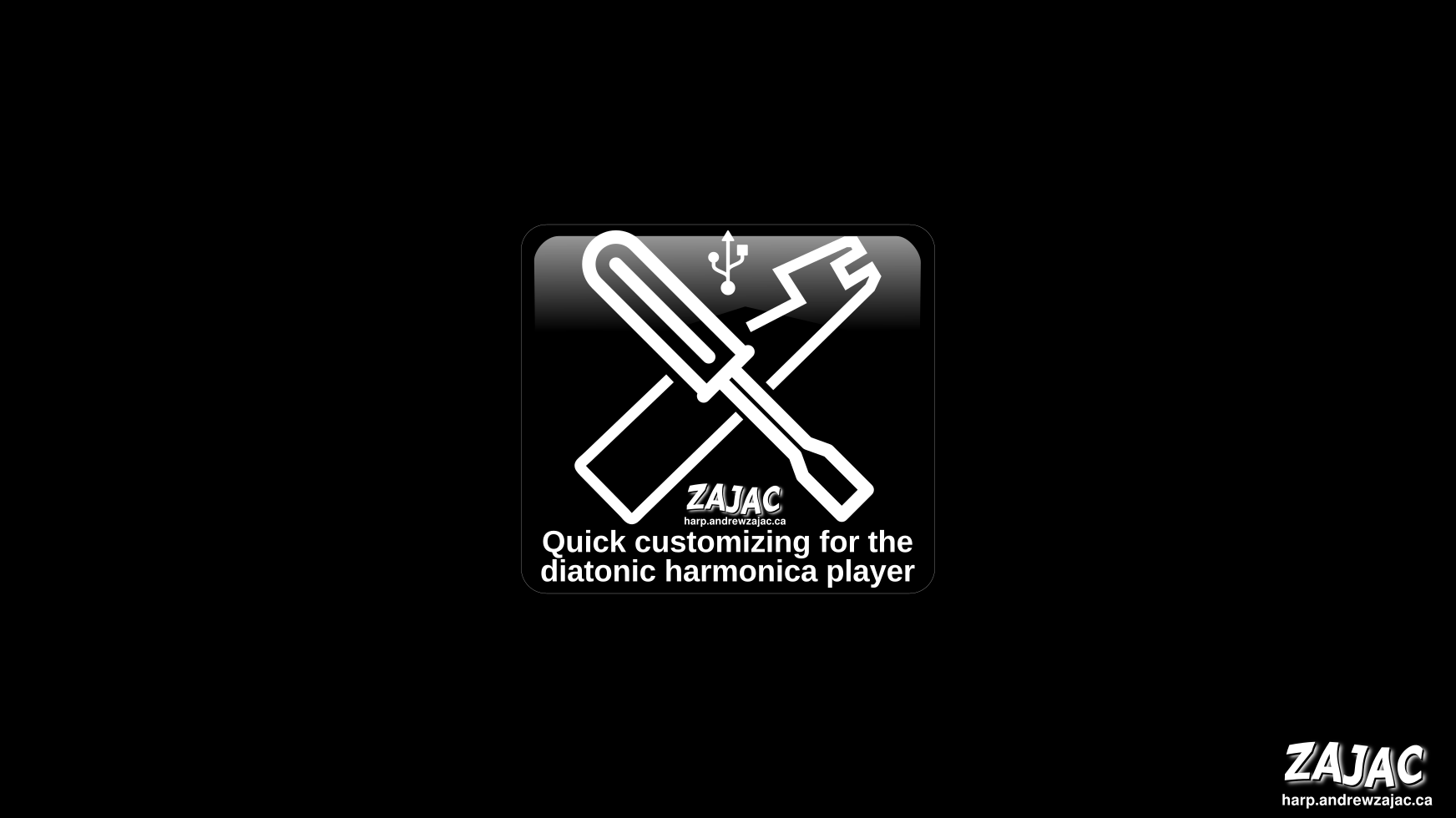 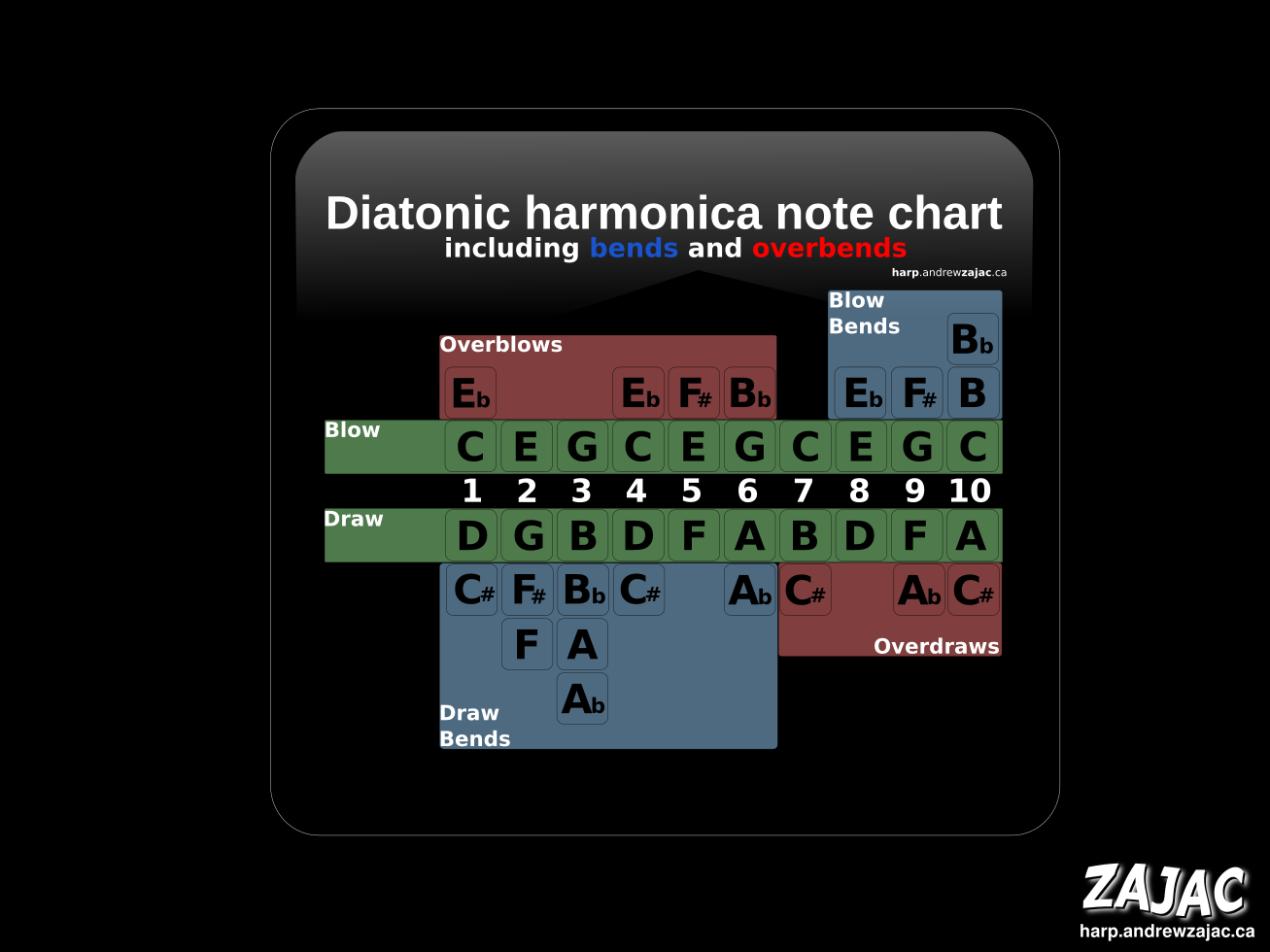 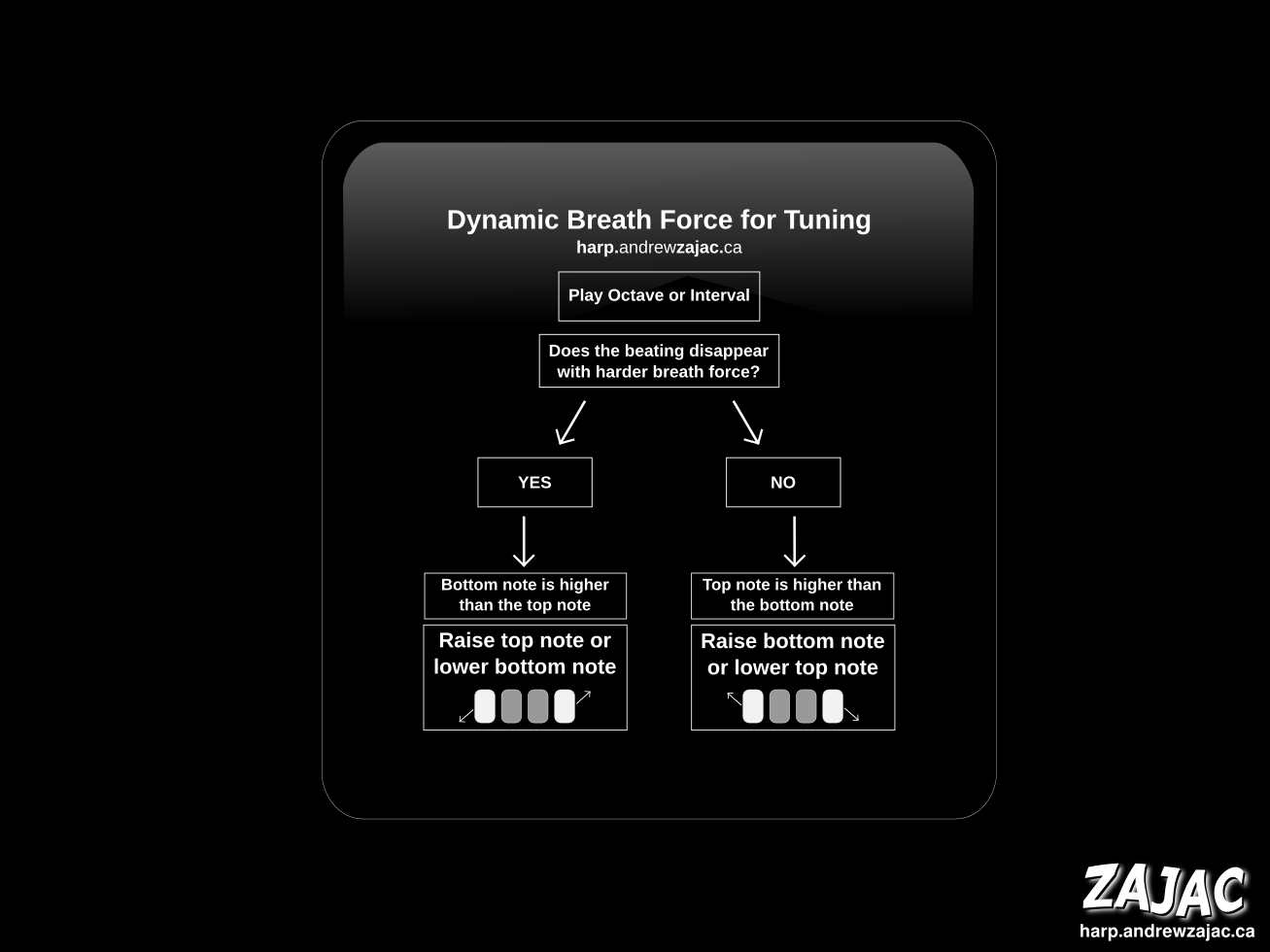 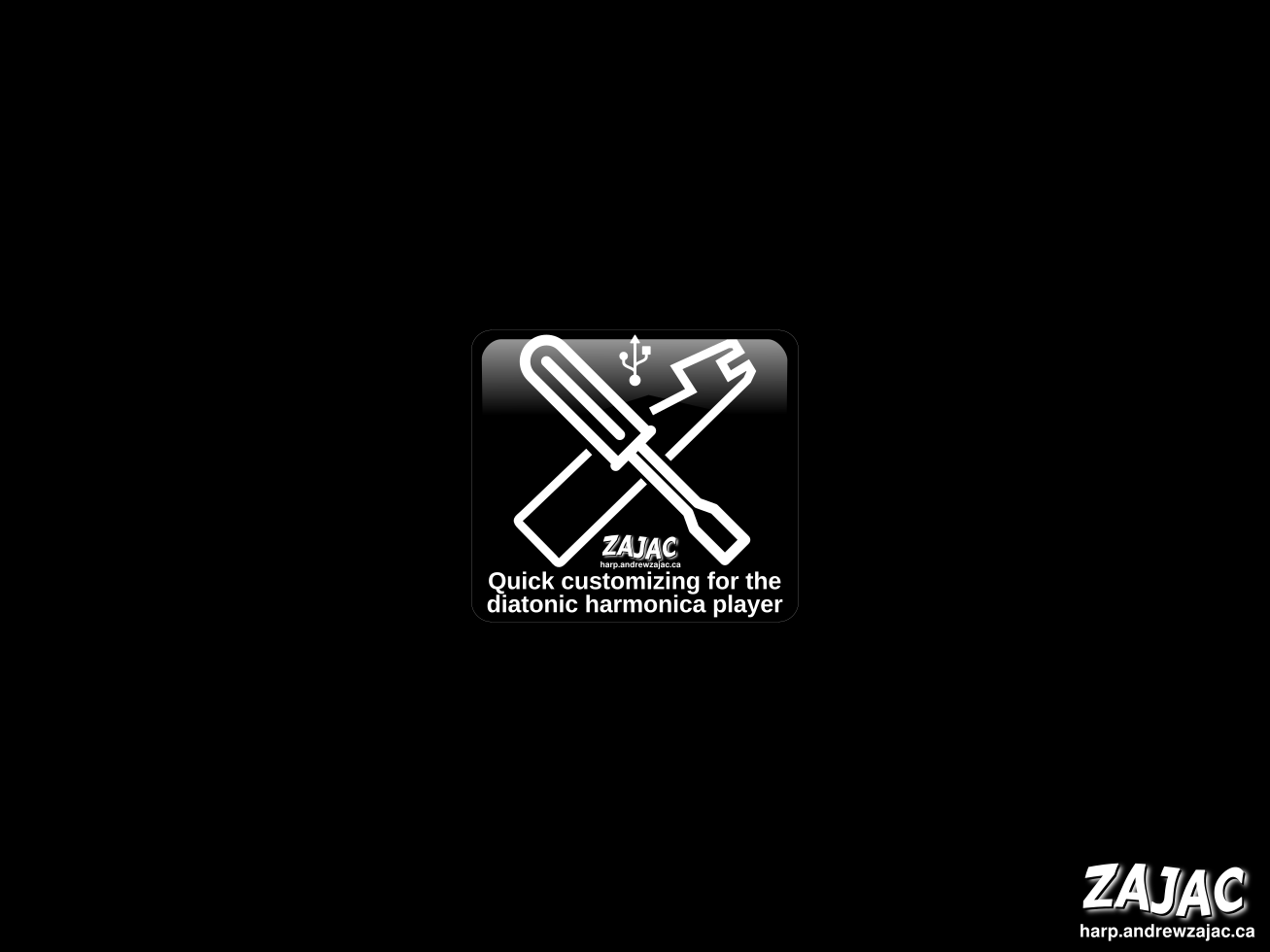 Question about tuning a harmonica "correctly'

Don't stress out about all the numbers! I just got asked a question about how to tune a harmonica "correctly" using 442Hz and offsets. Here's my answer: 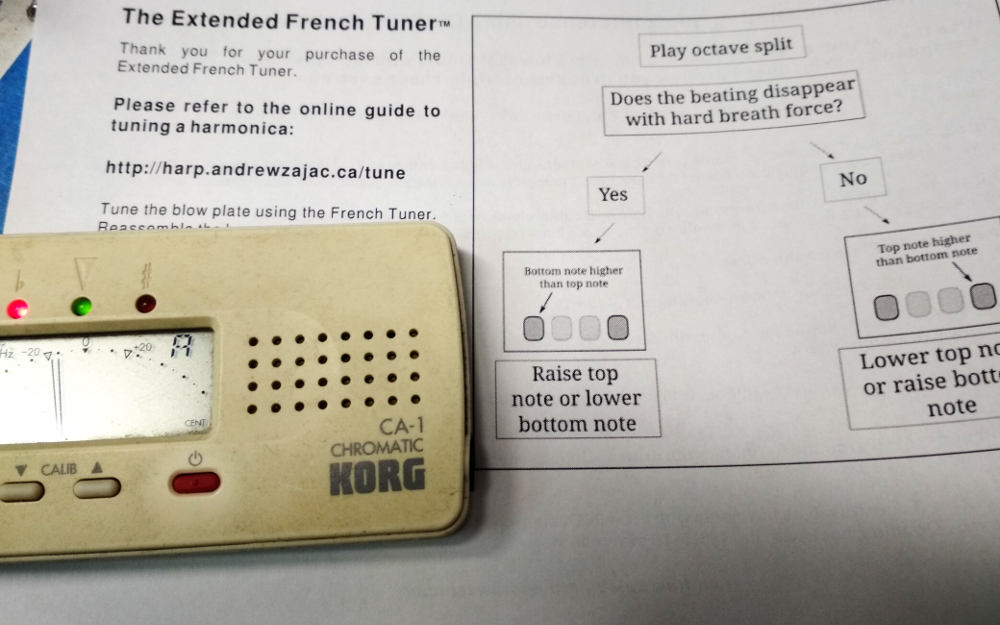 Don't worry so much about tuning "correctly" when trying to wrap your head around all the numbers (443 Hz, 442, 439, etc...) Know that harps that are tuned to Equal Temperament at the factory are usually tuned with an accuracy of + or - 6 cents! That is a very large margin of error. We only need more accuracy when we want the chords to sound in harmony (as in "harmonica").

Let your ears decide. Play single notes and play chords. If something sounds not right to your ears, you have the means to fix it. Play various pairs of notes and figure out which note(s) is/are the culprit. Then use "the numbers" and your ears to fix them. The "numbers" (offsets) are a tool to *help* you make the harp sound right. But it doesn't work the other way around. There is no expectation that you need to validate the tuning of a harmonica by looking at a number on a tuner. Single notes on harmonica are so unstable that using that method is very inaccurate. Just play it and if it sounds good, success!

Tuning by numbers as I describe in the tuning sheet you got is a quick way to do things. You will not achieve perfect accuracy using numbers alone. You need to use dynamic breath force while playing two notes at the same time and let your ears guide you. The methodology to do that is on my website and the link is in the documents that came with the tools. There is also a breath chart on the sheet.

The numbers do serve as a landmark to get you close. It's generally a little easier to set the tuner calibration to 339 and tune to make the needle aim for the zero mark instead of leaving the calibration at 442 and tuning to -12 cents. That's why I recommend changing to 339 Hz when tuning major thirds. Fifths are only about two cents sharp so somewhere in between 442 and 443. But we will hit the 2 draw a little harder so it's maybe best to tune it a little sharp, hence tuning the tonic of the draw plate to 443 instead of 442.5. Also, since those reeds are on the low end of the harp, we naturally tune them a little sharp anyway so the 3 blow may indeed be tuned to 443 anyway once you are done.

I hope that helps! Let me know how it goes!

I will be releasing both an English and French version of my Quick Customizing Videos. Both will have an equal amount of typos and grammatical mistakes. 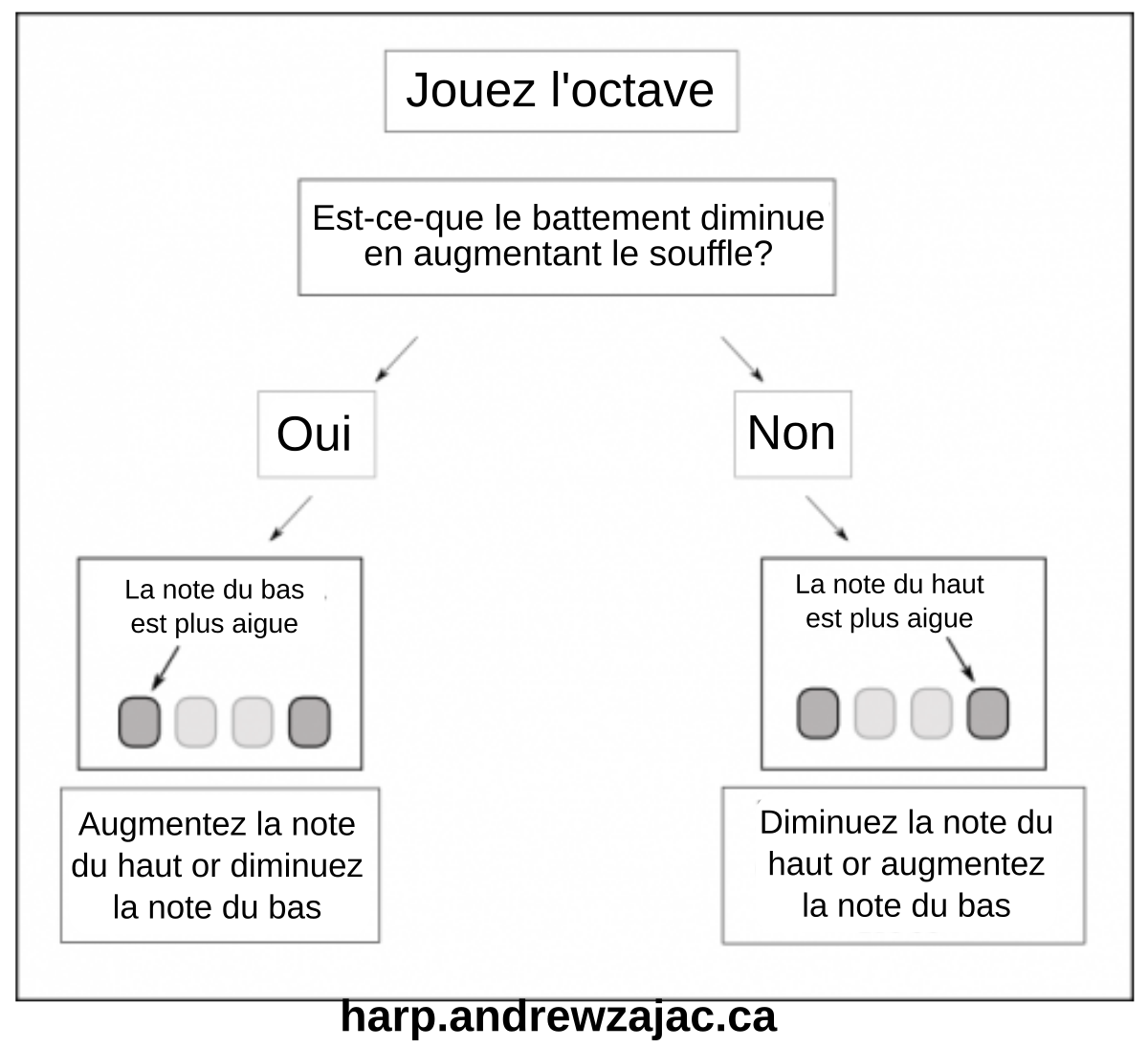 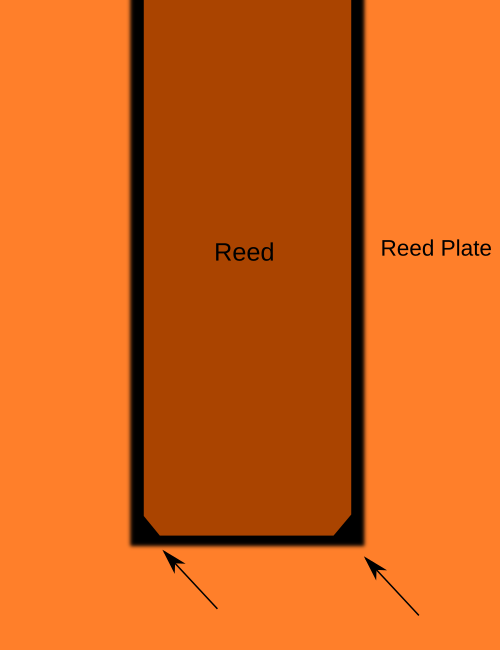 This is the third installement from the Q&A responses from Facebook. I am grouping these questions by topic, not chronological order. Some questions relate to one another and make for a nice stream of ideas when answered together.

This is the second instalment of answers from the Facebook Q&A responses form two weeks ago. I am grouping these questions by topic, not chronological order. Some questions relate to one another and make for a nice stream of ideas when answered together.

Two weeks ago, I asked you via Facebook for your questions for a Q&A session. I got so many wonderful questions, thanks! I can't answer them all at once so here is the first instalment. I am grouping these questions by topic, not chronological order. Some questions relate to one another and make for a nice stream of ideas when answered together.

My Basic Custom harmonica was formerly known as "Semi-Custom." The new name clearly reflects the amount and quality of work done to the instrument which includes correcting all factory defects, high-impact improvements and Sympathetic reed work™.

Prices for my Basic, Full and Overbend custom harmonicas remain the same.

Get a grip! Eliminate the guesswork

This is an older video and it's become a little hard to find on my website as I have added content over time.

It's nonetheless a very important video. Here is an easy, low-tech way to "uncover" the secrets of advanced reed work and embossing.

Reed Work
In the second half of the video, I demonstrate some reed work techniques. When it comes to reed curvature, there is a lot of confusion about what a well-shaped reed should look like.

The reed is dynamic; its shape changes as it swings. That's why The Grip is so important. It allows you to see the reed's shape at the very moment it passes through the slot.

From 2015:
"Shape your reeds, do embossing and troubleshoot weird sounds by getting a good look at what your reeds are doing. Use this method to perform some delicate tasks without the need for a light table or a microscope. All you need are your eyes and a bright piece of paper.

I've mentioned this method before as part of at least two other youtube videos. I thought I should make a video to focus on this particular technique as it is applied to reed work, reed alignment and embossing."

To have success at customizing the diatonic harmonica you need to be able to rebuild the instrument from the ground up. If you are comfortable with this idea, you will be able to handle any problem that is thrown at you.

I reference this video where Joe Filisko talks about the Hohner Affiliated Customizer program (SPAH 2018):